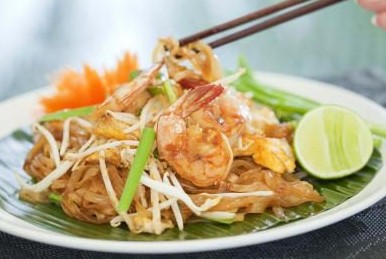 Invented in the 1930s by a Chinese-Thai chef, this dish of thin rice noodles stir-fried with egg, tofu and shrimp, and seasoned with fish sauce, sugar, tamarind, vinegar and dried chilli has subsequently reigned as the poster boy for Thai cuisine.

You may want to read 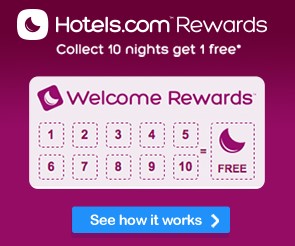 The Kingdom of Thailand has an area of almost two-hundred thousand square miles (over five hundred thousand square kilometers). The country is commonly divided into four main regions and borders Burma, Laos, Cambodia, and Malaysia. Here we look at Thai culture, customs and etiquette to understand the people better.

Thai is the national and official language of Thailand. It is said that seventy-four languages are spoken in Thailand, including numerous Thai dialects. Ethnic and regional dialects are also spoken, as are various dialects of Chinese. In the north, each hill tribe has its own language or dialect, though these tribes usually also speak Thai.

Tones are the core of Thai. As important as any vowel or any consonant, tones distinguish the meaning of one word from another. Spoken Thai and Laotian are written with slightly different scripts, but are linguistically similar.

Thailand’s government and culture, including Thai family values are influenced by animism, Indian culture and Buddhism.

A noticeable manifestation of animism in Thai culture are the spirit houses associated with almost all houses and buildings. These are usually small huts placed on a pedestal, that serve as a home for the spirits associated with the site. These houses are decorated and presented with daily offerings. Many large trees are also considered to house spirits and are decorated and given offerings.

In everyday life in Thailand, there is a strong emphasis on sanuk, the concept that life should be fun. Displaying positive emotions in social interactions is also important in Thai culture.
Respect for hierarchy an elders is considered very important. The custom of bun khun emphasizes the indebtedness towards parents, guardians, teachers and caretakers with reciprocity the key. This is key to Thai family values.

Thai monks are forbidden physical contact with women. Laypersons are expected to sit or stand with their heads at a lower level than that of a monk. Within a temple, monks may sit on a raised platform during ceremonies to make this easier to achieve.

When sitting in a temple, one is expected to point one’s feet away from images of the Buddha. Thai people consider the foot to be the dirtiest part of the body, and the head the most respected part of the body. When seated on the ground, Thai’s point their feet away from others, either to the side or behind them. Always take shoes off when entering a temple or a home and never touch anyone on the head as this is considered a bad omen. 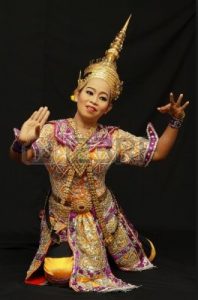 Many of Thailand’s rules of etiquette are by-products of the Buddhist religion. Serenity is valued, anger is avoided or minimised. The Thai custom of wai is a salutation involving a prayer-like gesture with the hands, a serene smile and may include a slight bow of the head.

If invited to a Thai’s home, gift giving etiquette states a gift is not expected, although it will be appreciated. Gifts should be wrapped attractively, since appearance matters add bows and ribbons. Appropriate gifts are flowers, good quality chocolates or fruit. Do not give marigolds or carnations, as these are associated with funerals. Wrapping a gift in gold and yellow is best. Avoid green, black or blue as these are used at funerals and in mourning. Do not be offended when your host does not open your gift. In Thailand it’s considered rude to open a present in front of the giver.

Chut thai, which literally means “Thai outfit”, can be worn by men, women and children. The Thai custom is to dress modestly, to be perceived in a good light. Chut thai for women usually consists of a pha nung or a chong kraben (both lower body wraps), a blouse, and a sabai (shawl like garment or breastcloth). Chut thai for men includes a chong kraben (lower body wrap) or pants, a Raj pattern shirt (similar to a nehru shirt), with optional knee-length white socks and a sabai.